I can still remember sitting on the couch, Mom sitting next to me, trying to comfort my teary soul.

It was the summer of my eleventh birthday, and, as usual for summer, I was taking swimming lessons.  In class that day, we had been given the chance to jump off the high-dive, and the rumor was that we were going to be forced to jump the next day.  I hadn’t gotten a chance to jump today, and now I was super-scared of jumping tomorrow.  Now, this wasn’t any normal fifteen feet higher than the surface of the water high dive board, like you usually see.  This was like one of those Olympic high dives where you had enough space for at least four or six Goliath-sized giants to stand on each other’s shoulders between the tip of the dive board and the surface of the water.  It was high.  And the ladder to climb to the top was, of course, LONG and high.  Top of Mount Everest high.

Now, before you get any ideas, I’m not afraid of heights.  There are many things I have a healthy (or unhealthy in some cases – spiders) fear of, but heights is NOT one of them.  But, for whatever reason, I was deathly afraid of jumping off that high board.

The crazy thing was, I hadn’t been as I watched several of my classmates jump off.  I wasn’t afraid at all during the drive home.  I was excited.  But somehow, as I got further away from the actual board, it kept getting taller and taller.  And, as I talked with Mom about it, I felt fear growing in me.   I actually realized that I was getting more afraid the more I talked about it.  I even worked myself into tears.  I remember having this disconnected part of me thinking, “What’s going on?  Two minutes ago I was excited, why am I scared now?”  But I was.  Deathly so.  Suddenly, what had just a few minutes before been an exciting adventure, was going to literally kill me.  I pictured myself jumping off and never coming up – I would die at the bottom of the deep end.  Or I would jump, and I might even come back up, but I wouldn’t know where I was, and so I’d die swimming in circles.

I know, it sounds crazy.  The teachers were there to direct me, to protect me, or to swim down to the bottom and bring me up.  But the more I focused on the dive board, the more fear grew in me.

Which, I have learned, is how fear works.  It grows.  Whether or not it’s a rational fear – you focus on it, and it will grow.  You focus on doing the world’s worst belly-flop off of a dive board that is five giants’ height tall, and your fear of death (or all your bones shattering at once) will grow.  You focus on falling down a mountain you’ve just hiked up, you will be practically immobilized as you try to climb down.  You focus on that small, harmless beige spider on the wall jumping at you and biting at your neck like a vampire – and your fear will grow.  Promise.  Suddenly your fear of that harmless spider will be so great that you can’t squish it with a Kleenex.  You’ll be screaming for your mother, or your boyfriend, to do it for you.  And they will laugh.  Because they just see the tiny little spider on the wall whereas YOU see this ginormous, face-sized, hairy spider that is cackling as he preps for the jump.

Fear makes us do silly things – like screaming bloody-murder over a spider, like never crossing the monkey bars as a kid, like never leaving our house, or never getting on an airplane, like not asking the teacher why we missed a point on the test (and so getting a lower grade), like avoiding conversations (and so ruining friendships).

Fear is a big deal.  It’s incredibly harmful. And the longer you don’t deal with it, the longer you let whatever you’re afraid of dance around in your mind, the higher the dive board gets, the hairier the spider, the darker the shadow, the meaner the teacher, the angrier the friend gets.

The longer you avoid your fear, the more power you give to that fear.

Fear is NOT one of those things that if you just ignore it, it will go away.  Promise.

Fear doesn’t go away, it grows – unless you deal with it head-on.

So, my advice?  Go deal with whatever you’re afraid of.  As they used to say in wild west – bite the bullet (they used to literally bite a bullet so they didn’t scream during surgery – no place for painkillers in the west) as soon as possible.  Just get it over with.  It’s probably not as bad as you’re making it out to be.  Go have that conversation.  Say “hi”.  Squish the spider.  Jump off the high board.    You’d be surprised how freeing and light you’ll feel after you get it over with.  Defeating fear is a crazy-awesome feeling.  You almost you believe you can fly…which might be a problem if you’re afraid of heights.

And no, I was not forced to jump off the high-dive the next day.  In fact, I think my teachers got in trouble for letting my classmates do it the day before, because we stayed  away from that part of the pool for the rest of the class sessions.  Go figure.  It’s okay though, I’m not afraid of high dives anymore.  I’ve jumped off of many since then. 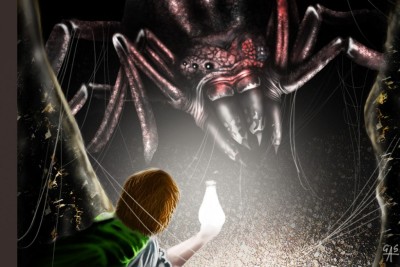 You mean this isn’t what you see every time you see a spider?